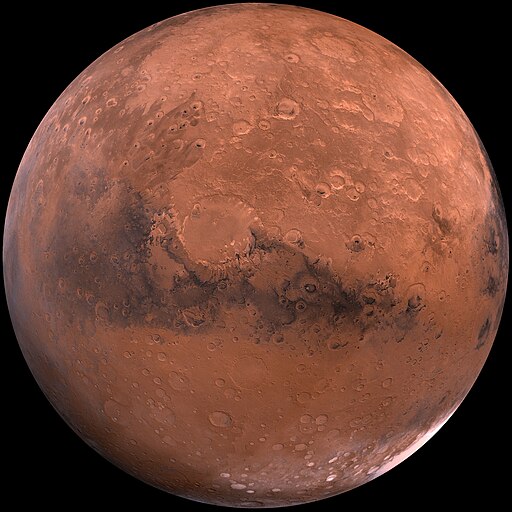 The planet Mars is in the news fairly often.  NASA, if not some private enterprise such as SpaceX, or a host of other countries, apparently will someday get back to the Moon and/or go to Mars.  It seems strange that my generation, in its youth, reached the moon and planted the American flag.  That was almost 50 years ago.  Since then, no one has gone beyond orbiting the Earth.  You can blame it on politics or lack of vision, but it’s awfully slow going.  We have the technology, but not the will.  At the rate it’s going, I won’t be around to see people from Earth getting to Mars!  I’ll have to watch it from Heaven.

Yes, I’m curious about Mars.  Most likely it has been a dead planet, void of life ever since it was created by God.  But, it’s part of His creation and that makes it a wonderful piece of real estate for whatever reasons.  Permanent bases, resorts, hotels anyone?  The science fiction triology about Mars by author Kim Stanley Robinson covers the possibilities.  For the most part, Mars becomes a second Earth, copying all the issues and problems of Earth.  The triology is a visionary piece of fiction about a future Mars we colonize and terraform.  So much for science fiction and one man’s viewpoint.

A popular acronym made from the letters in the word BIBLE is “Basic Instructions Before Leaving Earth”.  Of course, that acronym only works in English.  It has some meaning for English speaking Bible believers, but the acronym is, in of itself, only a happy happenstance of the English language.

However, what if we take that in another way of “leaving”?  Bible believers would tell you they’re going to Heaven.  But, if you’re talking science fiction, or in our case, actual possible future science, what about leaving Earth for Mars (let alone the Moon and a whole bunch of other places in our Solar System)?  What does God have to say about that?  Nothing.  But then, God says nothing about all of our technology.  Technology is a two-edged sword.  It is what we do with it that matters.  It can be used for good or bad.  As long as it’s used for good, technology can be fruitful, Kingdom work.

God says believers go to Heaven after they die.  But I ask, before they die, they can move to Mars, right?  I’m assuming that Rapture, which is when Jesus returns to gather up His believers, will work the same from Mars as from Earth.  Also, if Deafness is not cured by then, there will also be a Deaf Church of Mars and Deaf people worshipping God among all the other churches.  So, how wide, how long, how high and how deep is God’s love?  (Ephesians 3:18)  As big as His entire Creation, the Universe!